An Interview with Rebecca Shimoni Stoil

One of the first questions I asked Rebecca Shimoni Stoil, a PhD student at Johns Hopkins University and reporter for The Times of Israel, was why there has been a consistent history of world news media in opposition to what I see as the true story of Israel.

“There’s some really, really good material written suggesting that this isn’t even a symptom of the 20th century,” she said on the phone last week. “The preoccupation with narrative surrounding the Holy Land is a phenomenon of western culture and European post-reformation culture. You can certainly trace into the mid-19th century a deep level of interest in the political goings-on there, which is inextricably tied to the predominance of the holy land in Christian theology.”

People are excited about the land of Israel, passionate about it, and it takes on larger-than-life qualities in the minds of people tied to this narrative, she says.

“I’m sure every Israeli who works in America can tell you how disappointed Americans are when they find out the Jordan River is tiny,” she chuckles. Reality never measures up to the imagination, and when it comes to Israel, the world rhetoric surrounding it is one that has long imagined some mythical magnificent place – not a place of real people living real lives.

“It can be shocking to discover it’s a place with real people and everyday mundane problems,” she says.

And yet, talking about Israel as a “hotbed of international crisis” still makes it larger-than-life and super important on the world stage. Regardless, Israelis on the ground need to “make peace with their everyday life – that’s not always a very sexy story.”

It’s we who make the story bigger than it really is: framed around narratives of conflict, of contested spaces, of religious-secular divides, legitimacy vs. conqueror.

One of the things I loved about talking with Rebecca was her affirmed dedication to telling the real story without bias, of dedication to being a true reporter reflecting circumstances and allowing the readership to make up their own minds. It’s a hard thing to do in such a politically charged place and when the person reporting the stories herself made the choice to leave her native America and become an Israeli citizen at the age of 22.

“I really like walking the tightrope between current events and history,” says Rebecca. “It’s nice as a journalist to have a longer perspective, particularly when you’re trying to be analytical. As an academic, it’s nice to have the professional background of writing in an accessible, clear manner. Our audiences don’t owe us anything; we owe our audiences a good story.”

Rebecca Shimoni Stoil made aliyah when she was 22 although she had been wanting to since she was 16 and a Jewish day school student in Arlington, Virginia. After graduating from the University of Chicago, she moved to Israel and claimed citizenship as every Jew can do, from anywhere in the world.

She became a journalist “very much by accident,” though she comes from a long line of journalists. Her grandfather, a decorated war veteran, wrote for Stars & Stripes until he was blacklisted during the McCarthy era.

“He died when my father was 16 so I never met him but a lot of what I do know about him was that the FBI sent people to his funeral and documented his funeral and his file,” she says. “I never meant to become a journalist, but I come from a decently long line of journalists, so I suppose it was somewhat inevitable.”

Like her grandfather, Rebecca got her start in journalism through her own military service, as a soldier in the Israel Defense Forces. At first, upon moving to Israel, the IDF told her she was “too old” for service. But she wouldn’t take no for an answer.

“If I were male and I made aliyah at 22, military service would be mandatory,” she says. “In my case, it was not just optional but impossible due to advanced age, so I challenged them on that and won, and enlisted and I thought I was enlisting into a combat unit.”

Instead, she was drafted to be a secretary. “I spent another couple of months with some people I met along the way trying to convince them that nobody enlists in the IDF to do PowerPoints and Outlook. It would be a waste of resources and of my own enthusiasm.”

And she won. After 2.5 years serving as a combat medic in the Israeli armored corps, she could not imagine working at a desk job and applied for a position with the Jerusalem Post. She credits her “fluency” in security language as winning her the job.

She worked on the Internet desk and then became the internal security reporter. She spent her days “chasing cops and robbers and Qassam rockets and suicide bombings” at the end of the 2nd Intifada, 2006-2008. When she married and became pregnant, she felt “doing belly flops into ditches at 6 months pregnant” might not be the smartest activity and transferred to become the parliamentary reporter working in the Knesset until 2011.

Thanks to today’s technological connectedness, Israeli reporters can call Hamas officials in Gaza and get immediate answers. It’s true with ISIS officials too. Reporters on opposing sides can contact leaders and have conversations – easily, and freely.

“Reporters have unprecedented access to one side of stories, when one side of stories isn’t constrained by having a government behind it,” she says. The illusion of access exists for accepted bureaucracies where in reality there are layers of constraints. In situations with no governmental order, there is more openness, more access.

We talked about the issue of new media – blogs, social media and other forms of sharing information – and how that affects modes of traditional media.

“In its current form, social media and new media tend to encourage immediacy over depth,” she says. “There’s a role for that in reporting, but I don’t think that should be all that reporting is. On the other hand, it’s impossible to ignore the positive aspects of the democratization of media. When I look at my own Twitter following and I realize I am indirectly in communication with Iranian journalists who are writing about the same negotiations, I think it’s a wondrous thing.”

They read each other’s stories. They are in contact. They become partners in the process when historically, they never would have connected.

“I really, really value that,” she says. “It creates maybe not a space for direct conversation but an indirect discourse which is really awesome.” 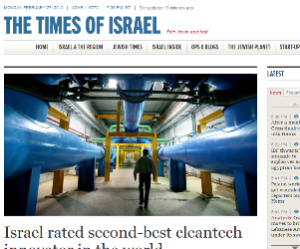 Still, Rebecca believes in the “old-fashioned sense of reporters as conduits for information on which leaders can build opinions.” She refuses to blur the lines and start opining in quick tweets just because it makes for good reach.

“I see my role as giving people the information to form their own opinion and because of that I work as hard to take my bias out of it,” she says. “That’s an old-fashioned notion of what reporting should be. It is one of the reasons I love working for Times of Israel. We really strive to offer a balanced perspective, and it’s not always easy. A lot of effort goes into being balanced.”

This week, Rebecca Shimoni Stoil is coming to Detroit to address media folks, and I had the wonderful good fortune to speak with her last week by phone in a private interview – because I was told bloggers are not welcome at the event. Ironically, Rebecca works as a journalist for The Times of Israel, a wholly online publication.

I am grateful to Rebecca for speaking with me one-on-one by phone so I could learn about, and share, her wonderful career and her vision to report on world politics and Israel’s role therein from a truly journalistic, unbiased vantage point.

← How Old Are You?
The Last Workshop →